Quora is bursting at the seams. New users are rushing in. Although Quora veterans persistently complain about the site’s falling quality, it’s become a serious concern after the massive holiday surge.

While early adopters grokked the site’s design effectively, incoming users from a more widespread base have not. Misuse of common functionality, an increase in mediocre answers, and general noise pollution run rampant.

Retaining Quora’s high standards will demand attention on many fronts. I believe there are a few simple design changes that would drastically increase the quality of contributions:

1. Hide the answer box. This is relatively obvious. New users constantly pollute the answer stream with comments. While these are typically marked “unhelpful,” they require action by informed users.

Hiding the answer box behind an extra click would save everybody time. The extra click could be placed adjacent to a comment link, emphasizing a distinction between answers and comments:

I’m sure the current design is a legacy of Quora’s pre-launch, wherein they didn’t know that users would write a lot of answers, but hoped to facilitate the process.

2. Draw the user’s attention to discussion. Comments are second-class citizens despite being essentially for collaboratively answering questions. As the site grows and Quora’s PageRank increases, the average view count for each question will rise. Assuming a fixed percentage of visitors write answers, an increase in answer quantity will dilute the overall quality. Quora can further divert user attention toward discussion by highlighting interesting conversations: 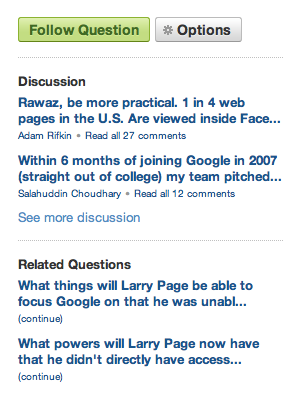 While some question pages do provide discussion amongst answers, the conversation often becomes convoluted as answers are shuffled around due to voting.

3. Progressively enhance the site for new users. Quora’s feature set is awfully comprehensive: notifications, suggested edits, follows, answer summaries, anonymity, best sources, topics, profile pages, filter, and so on. It’s a lot for new users to take it. While it certainly demands complexity from a subset of users, it can be minimalized for most.

Currently, Quora does a good job of stripping away a lot of cruft for search engine hits. I propose they do the same for new users. A large set of administrative features (suggest edits, topic edits, question edits, question detail edits, flagging, and marking as best source, feature comments, and so on) can initially be hidden—and later, unlocked—for new users after achieving community validation. Users must buy into Quora’s culture before contributing for the product to work.

Stack Exchange addresses this by setting explicit karma requirements for each action on their sites. This design has been highly effective. Although the technically-oriented subject matter on Stack Exchange sites lends itself to stringent requirements, Quora’s open-ended nature makes this a harder problem to solve. By sufficiently analyzing feature usage and testing, I’m confident the Quora team could pull it off.

4. Answer summaries have been underutilized. As a Quora feature, answer summaries make a lot of sense. They allow people who aren’t necessarily connected to the community (and hence don’t care about user reputation) to efficiently find answers to their question. This class of user is likely to stumble upon Quora through Google. As Quora’s PageRank improves, answer summaries will grow in importance. Sadly, users have little incentive to compose them. Everybody wants to be the top answerer; no credit is associated with a great answer summary.

In my opinion, answers fall into three categories:

1. Controversial discussion in which there are a number of well-informed, well-thought out answers that aren’t necessarily right or wrong. Answer order is serendipitously based on the quality of the content, popularity of the poster, or timing of the post. Answer summaries simply cannot effectively summarize the discussion’s breadth.

2. Answers that are more or less “correct.” They can be subjective, but not too subjective so as to warrant multiple correct answers. Answer summaries will roughly repeat the top answerer, and hence are pointless.

3. Answers that are lists. In this case, summaries simply compile the list of answers people have given.

Because summaries aren’t voted upon, their quality often leaves something to be desired. Ideally, crowdsourcing should take effect in the same manner as Wikipedia, leading to a well-revised summary. If Quora is serious about maximizing this feature’s value, I would recommend they make summaries a first-class citizen:

Showcasing them would signal their importance to users and add accountability to their quality. Ranking the most highly-viewed summary could add another dimension of competition.

Please post your thoughts and ideas in the comments!

Adam Bossy holds a remarkably high lurking-to-contributing ratio on Quora and talks about the service to anybody who’ll listen.

You are currently reading Evolving Quora’s Design for Growth at The Quora Review.