On Friday, Quora took home the much coveted “Best Startup of 2010” Crunchies Award. Following on the heels of this great recognition, Quora will be throwing an über exclusive party at the Old Pro down in Palo Alto. What? You haven’t heard about it? Well obviously, you didn’t meet the “Active User” threshold. 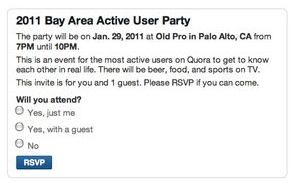 Much speculation has taken place over who will show up to this event. It is rumored that Eunji Choi, one of  10 New York Observer-recommended Quora must-follows, will be flying in from the Big Apple to host a kissing booth. What is even more interesting is that Project Spit-Swap (as it has been dubbed) is being sponsored in-part by former Director of Engineer of Facebook and Quora’s #1 Fan, Yishan Wong. (You may also recognize Yishan as the Quora old-timer who challenged Robert Scoble on Sunday to “shut up for awhile, and study what constitutes real quality on Quora before you start posting again.” ) Curiously, Scoble, a usual social fixture at  tech parties and meet-ups, has declined attending this event in favor of being in Davos.

The honor of most intriguing guest may have to go to the telepresence of an anonymous user. Yes you read that right, telepresence. It looks like one user, in an effort to maximize her Klout scores (by live-tweeting the exclusive event) while maintaining a certain level of social panache, has posted on Craigslist to seek an Anybot that can interact with users at the party, so that she can tweet unobtrusively in realtime at her base of operations in the Mission. Whether or not Quora representatives will allow such telepresence, however, remains to be seen.

As with any who’s-who type of events, always fascinating are the people who choose to skip the function altogether. One of Quora’s most valued Admins will be skipping the party in order to attend her shotgun wedding* to Twitter’s Richard Henry. Quora’s premiere expert on Dating and Relationships, June Lin, in a slap-in-the-face-to-Quora move, has opted to attend the San Francisco Ballet with her beau, whom she had met through Quora.

Intrigued? Want an invite? We hear through the grapevine that there are quite a few users with open “+1”s  who are seeking a ride to and from the party. Time to put that zipcar subcription to good use!

You are currently reading Exclusive Quora Party Expecting Kissing Booth and Anybot? at The Quora Review.