I have never enjoyed writing.

I’ve never particularly been a heavy user of social networks either.

Yet, over the last year, I’ve written a fair amount on Quora and I’ve become fascinated by Quora despite being mostly immune to the charms of many other web based services.

I found myself asking the question “Why is Quora so addictive?”

How can a mere inanimate internet service empower me to crystallize floating thoughts in my head in a form suitable for writing and make my fingers convert them into answers?

I spent a fair amount of time thinking about it, and then realized the way I use Quora reminds me of patterns I’ve seen in other games coupled with lots of high density information.

In this post, I’ll try to dissect the mechanics used by Quora and how they make the service fun to use in addition to be informational.

What are the game mechanics used by Quora?

When I first started using Quora, beyond the initial phase of purely reading answers, what got me writing was the fact that answers had some kind of scores.

Your primary metric of score is monotonically increasing progress along a vertical upward axis, with constant reminders of how other people have scored with respective to your scores.

Most recently, Quora has also started ordering answers by using a PageRank like scheme, which means that people who have a history of writing quality answers now have longer term incentives to do so.

It’s a gentle and persistent competitive reminder, kind of like Doodlejump. 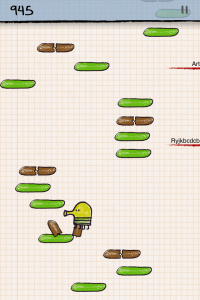 Doodle Jump has constant gentle reminders about your progress with respect to others.

And competition, as they say, breeds excellence.

Quora is also really good at instantly giving you feedback about when you do something right.

It’s key for any game to provide feedback to a person if they are doing something good, and that builds a feedback loop, and Quora does that quite well. Games also use that same pattern of making that feedback come to you in a very visually discernible manner.

As a comparison, you’ll see many games have all sorts of ways to provide you gratification using similar feedback channels.

Bejeweled rewards you with lots of bright explosions for matching gems combinations.

﻿Quora provides you feedback in the form of real time notifications to a similar effect:

SURGEON GENERAL'S WARNING: Quora is addictive, but don't let that stop you

One of the most wonderful aspects of Quora is how there is a bidirectional loop between finding content and finding people. This pattern is quite reminiscent of MMORPGs where finding people and content is seamlessly interleaved.

If you look at public chat channels in MMORPGs, they have information about people looking to do certain activities. You find people while searching for content, and in turn, you find more content once you find more people, and the cycle continues.

Thus like the Quora feed, your response or lack thereof is usually driven by some combination of the person and the activity involved.

As a comparison, on Facebook the interests of your friends are fragmented and there is no categorization of what people are talking about, so instead there is lots of low quality oversharing. Many of your friends post things that leave you going “I honestly don’t care”.  That doesn’t mean you aren’t friends with them or you don’t value their updates on certain topics of common interest – just that you have to put up with their uninteresting ones.

The other interesting property about Quora is that through the mechanism of competition and collaboration is that over a period of time, you go from seeing certain people as random folks on the internet to people you can actually trust about topics that are interesting to you.

At that point, Quora tends to become your primary connection to those people who you’ve come to know mainly through the website, beyond a static resource.

Like many other social services, randomness is also a key part to what adds to the addictiveness of the site as with the randomness comes the surprise and joy of discovery.

Quora has a number of reward systems that are a lot like a skinner box where the rewards are not consistent, so you are forced to play again and again in the hopes of getting some rewards.

Thus, if you look at the psychology of addiction, randomness tends to instill addiction far better than consistency and predictability, because if you do not have a guaranteed and predictable reward for doing an action, you are likely to perform the action a lot more to maximize your chances of getting that reward.

Consider the following behaviors that users participate in and are rewarded for on the site:

Adding a question about something you are interested in – you may or may not get answers. There is always that randomness that someone will write a brilliant answer to an otherwise simple question.

Writing quality responses – you may or may not get upvotes, and even if you do, they may not meet your expectations or far exceed them. Are you going to get 3 upvotes, 10 upvotes, 20 upvotes or 100+ upvotes ?

Are you going to gain followers after writing a chain of many quality answers ?

Beyond the somewhat shallow reward systems of just upvotes or followers, there is also a lot of randomness in terms of the impact that you will have with your answers. Your answers might make someone else think of things in a completely different way or help someone make an important decision – you don’t really know.

Unlike skinner box like systems typically employed in a game for amusment purposes, your answers on Quora can have a very direct impact on making another person’s life better in some way.

How satisfying is that?

While there is a strong co-relation between a good question and good answer and the relevant reward systems of the site, there is also a lot of randomness going around, and that randomness instills addiction.

Despite all the game mechanics, needless to say Quora isn’t a game.

While the mechanics are integral to the core of the product in many ways, Quora primary purpose isn’t to be entertaining.

For instance, if you tried to monetize Quora really by adding an option to sell upvotes, that would conflict with and undermine the purpose of using Quora in the first place. 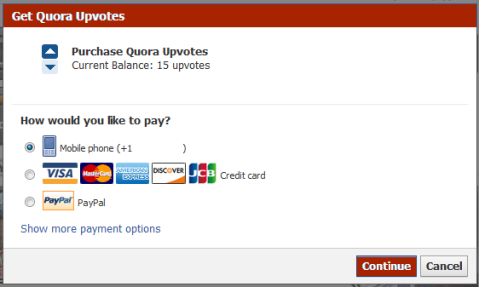 Knowing how much Quora values quality, they probably won't do this

The mechanics of “Thanks”

While I’m quite happy with a number of the things that work well on the site, one that I’ve particularly disliked is thank.

Currently, when someone thanks me, this is what comes to mind:

I liked your answer though lets just be friends.

Unlike an upvote it doesn’t give you anything tangible for your answer, and many people don’t seem to realize that difference.

Typically, in gamer speak, there is a derogatory term called a “Clicker”, which refers to people who do things slowly simply because they click on-screen buttons rather than using hotkeys which are faster. Well, currently when I’m on Quora, I feel like a clicker.

As an example, if you play Starcraft, there are hotkeys for anything and everything, and if you don’t use them,  you won’t get very far.

Starcraft 2 hotkeys: theres an app for that

Other web services have also taken the approach of having extensive hotkey support to allow power users to interact with their services better, most notably Gmail.

You can improve your APM by not clicking this

Even Facebook has arrow key shortcuts for moving around between photos.

I’d very much like more hotkeys on the site to jump around questions more quickly.

In keeping with my note about above Quora not doing anything to undermine answer quality, I’m quite happy to not have any achievements on the site unless they are done right.

At the same time, achievements do work with respect to increasing the stickiness of a product.

The average game will just give you achievements for doing something you were doing anyways to make you feel good about yourself, and if Quora had adopted this approach, you’d end up with lame achievements like this:

Though then it comes down to it, I think a better use of achievements is to incentivize people to to explore all the features of a product in a gentle manner, and do things they haven’t tried out.

In the meantime, you can treat getting the smartest people on the site to follow you as achievements.

This might make for a good achievement, but till then we have Quora Bootcamp

I love Quora’s UI. I love the fact that when I file bugs about what looks like an issue with answer ranking, I get back a response saying that the ranks for the entire list of answers matched up with what were the expected ranks – on the first day of shipping answer ranking.

There are many hard scaling, algorithmic and natural language processing problems that lie ahead of Quora as a company. There is probably a lot of fancy matrix crunching going on behind what is the first version of answer ranking.

However, no matter how good the technology is, at the end of the day I realized it isn’t the source of the magic behind Quora.

It’s kind of like that scene in Star Wars where Darth Vader goes “Don’t be too proud of this technological you’ve constructed. The ability of to destroy a planet is insignificant next to the power of the force”.

I find the lack of faith of Quora naysayers disturbing

The number one thing that the Quora team has got right in the first version is the game mechanics behind the service, even  more so than their top notch technology and user interface.

Quora isn’t a search engine, and doesn’t aim to be.  Sure, it needs computational horsepower to do things, but unlike a search engine, the biggest value addition that the service brings is content produced by real human beings and how they interact with each other.

While the technology provides great tools, incentivizing people to act in certain ways is the far harder problem.

There are a number of companies trying to do various things to encourage the use of game mechanics in non gaming contexts, though often many of them end up trying to retrofit products rather than having the mechanics being a core part of the product. The end result often feels tacky and glued together.

It is the game mechanics that are well integrated into the core of the product that where the true magic of Quora lies.

Kartik lost his sense of humor the day he become a Quora admin, but he considered it a fair trade since he got an achievement out of it.

I currently work as a developer for a casual game called Cityville and and moonlight as a Quora admin.

This article is completely disjoint from both of those two affiliations, and doesn’t represent the views of either my employer, Quora or anyone else.

You are currently reading I don’t use Quora, I play it. at The Quora Review.